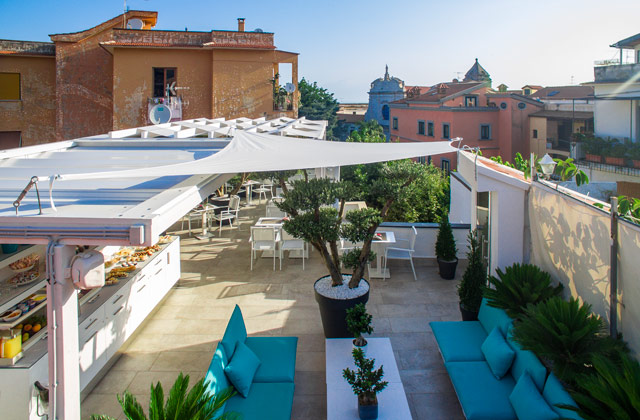 Magi House Antica Dimora is the perfect base for exploring the most beautiful destinations in southern Italy: Capri, the Amalfi Coast, Pompeii and Herculaneum, and Naples are all less than an hour away.

History buffs will love strolling the streets of the Roman ruins of Pompeii or Herculaneum, feeling part of a history dating back over two thousand years ago in the most famous archaeological sites in the world.

Those who love spending the day on the sea and discovering excellent cuisine will appreciate all the Sorrento Peninsula has to offer: gorgeous coastline, unforgettable food, and prestigious wines.

Romantics should explore the island of Capri and the pretty villages along the Amalfi Coast—Ravello, Amalfi and Positano—ideal for a get-away for two with their postcard-perfect atmosphere.

Sorrento sits on the clifftop overlooking the Mediterranean on the northern coast of the Sorrento Peninsula. The coastline below the city center is divided between the port area of Marina Piccola and the Marina Grande beach. There are two main squares in the town center: Piazza Tasso and Piazza Sant’Antonio, home to the Church of Santa Maria delle Grazie. The main sights in town are the Renaissance cathedral and bell tower, the 15th-century loggia of Sedil Dominova square, and the church and cloister dedicated to St. Francis of Assisi. The public gardens boast a magnificent scenic overlook facing the Bay of Naples and Mount Vesuvius. The town also has two museums: the Correale Museum and the Museum of Wood Inlay.
Continue along the coastal road through Sorrento to Massa Lubrense, located at the furthest point of the peninsula where the Sorrento Coast and the Amalfi Coast meet at Punta Campanella, a protected marine park.

One of the most beautiful islands in the Mediterranean, Capri covers an area of 3 square kilometers and has been famous since the time of the Roman Emperor Tiberius, who built a number of villas on the island; the ruins of a few are still visible. The  most popular sights on the island include the Charterhouse of San Giacomo, the Gardens of Augustus, Tiberius' leap, Villa San Michele, the Piazzetta square, and the church of San Michele. Take a boat tour around the island to see the Faraglioni up close and visit the Blue Grotto along with many other natural caves along the coast: The White Grotto, Green Grotto, Grotto of the Saints, and Grotto of the Certosa.

Positano is one of the most iconic villages located along the Amalfi Coast, tumbling down the cliffside to the water's edge from Mount St. Angelo and three Pizzi peaks. The colorful villas and homes in Positano have dreamy balconies and domed roofs, common along the coastline. In addition to elegant art galleries, restaurants, and cafés, the town is known for its unique style of linen clothing and handcrafted sandals.

Amalfi was once a powerful maritime republic, and the entire Amalfi Coast is named after this historic coastal town. One of the most popular destination on Italy's southern coastline, the town is nestled between the foot of a steep mountain slope and the water's edge, with winding streets and narrow flights of stairs. Amalfi's most striking sight is its magnificent Cathedral on the central square; climbing up through the town, you can still visit the historic paper mills that have been making paper by hand for centuries.

One of the most beautiful spots along the Amalfi Coast is located on the top of the cliff rather than along the water's edge: Ravello. Reached by climbing a narrow, winding rode up the mountainside, Ravello offers magnificent views from the scenic terraces at Villa Cimbrione and Villa Rufolo.

Pompeii is one of the most famous archaeological ruins in the world, set at the foot of Mount Vesuvius and covered in ash and stone on the morning of 24 August, 79 AD during a sudden and violent eruption of the volcano above. Though the natural disaster caused death and destruction for the inhabitants, this layer of debris preserved the town and extensive excavations unearthed ancient buildings such as the Villa of the Mysteries, the House of the Faun, the Amphitheatre, and the Villa of the Vetti.

Lesser known that Pompeii, Herculaneum was also covered with a thick layer of debris from the tremendous volcanic eruption of Mount Vesuvius in 79 AD. The remains of the town were found by chance, and excavations of the ruins began three centuries ago, uncovering houses, shops, villas, and baths. Among the most important and best-preserved ruins unearthed during the excavations are the baths and the Villa of the Papyri.

The vibrant city of Naples is the most important in southern Italy, and boasts a number of churches, palaces, and monuments that are testimony to its long history as a cultural and artistic capital. Near the port of Beverello, you can visit the Maschio Angioino, or Egg Castle (Castel dell'Ovo in Italian). Other famous city sights are the Galleria Umberto I and the Teatro San Carlo that border on Piazza Plebiscito and the magnificent Royal Palace. The city also has countless museums, Baroque and Renaissance churches, and - of course - great restaurants and pizzerias.

Just outside Naples, the city of Caserta became an important part of southern Italy's history in the 18th century, when the Spanish King Charles III commissioned the architect Luigi Vanvitelli to build a palace here that matched the splendor of Versailles. The result was the Royal Palace of Caserta, where visitors can admire the sumptuous apartments and halls filled with precious paintings, statues, furniture, and decorations. Surrounding the palace are three kilometers of gardens and grounds decorated with ornate fountains and marble pools.

Ischia is the largest island in the Campania region, with a full 34 km of coastline. Since ancient times, this island volcanic has been famous for its beautiful landscape, crystalline waters, and mild climate. The island is also famous for its natural hot springs, many of which have luxury spas open to the public.

Procida is the perfect destination for a boat trip, with its craggy coatline and volcanic landscape. The third largest island in Campania, Procida has only a single town on the island, filled with charming narrow lanes lined with colorful houses. This humble island is still home to fishermen and farmers, and has a lovely, laid-back atmosphere.

If you are still looking for the the ideal accommodation in Sorrento, please visit also  our sister home at only 100 mt far away: Magi House Relais!Situated in one of the most important alleys of the old town of Sorrento, in Via Padre...

Book directly from the official website of Magi House Antica Dimora, only then will you be sure to book the best rate at the most advantageous conditions. You will get the Lowest rates on booking and free cancellation within the terms (no...

Book early to get 15 % discount

Book early to get the 15% discount at the moment of the reservation! Only by booking and pay in advance your holiday in Sorrento, at Magi House Antica Dimora, you will receive the highest discount possible and many advantages to ensure maximum...